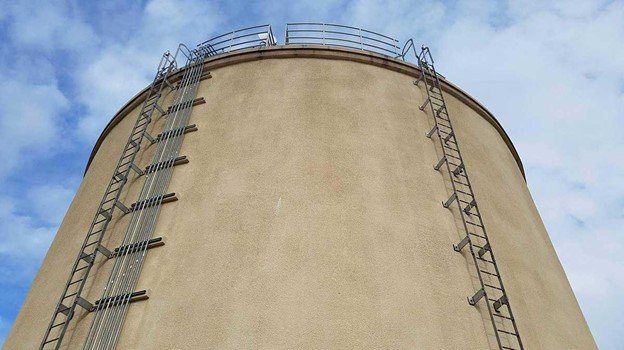 OSHA Requirements for Fixed Ladders – Don’t Get Caged In!

Most people get a quick mental image when the term “Ladder” is used in a sentence however the question of how to protect someone using a ladder tends to be more of a challenge to answer. A good place to start the discussion of ladder safety is to list the things we can all agree on.

Ladders have been around for a long time

Multiple sources including Wikipedia[1] describe similar versions of the first recorded example of a ladder being featured in a Mesolithic rock painting that is at least 10,000 years old, in the Spider Caves in Valencia, Spain. The painting depicts two humans using a ladder to reach a wild honeybee nest to harvest honey. The ladder is depicted as long and flexible, possibly made from some sort of grass.

The definition of a Fixed Ladder

OSHA says a ladder is a device with rungs, steps, or cleats used to gain access to a different elevation. Additionally, OSHA says a fixed ladder is a ladder with rails or individual rungs that is permanently attached to a structure, building, or equipment. Fixed ladders include individual-rung ladders, but not ship stairs, step bolts, or manhole steps. [2]

(1st) Eliminate The Hazard – The presence of working levels at different elevations cannot be resolved.

(2nd) Guard The Hazard – The existence of working levels separated by more than 4ft of elevation means the user can be exposed to a fall hazard in excess of OSHA general industry standards. An example of this type of solution would be an elevator.

(3rd) Protect The Worker – The least preferred hazard control but necessary when the hazard cannot be eliminated or guarded.

Fixed ladders are found in a wide variety of industries and applications such as inside a building for accessing a roof hatch, tall machinery, and elevated platforms or outdoors for accessing rooftops, silos and towers.

So, if ladders have been around for such a long time and they are currently used in so many applications, why is the subject of fixed ladder safety such a focus in today’s safety industry (beyond the obvious concern of “someone could fall”)? Perhaps one reason is that OSHA’s requirements for fixed ladder safety were updated in 2018 and many people are still studying what the new regulations mean to them in their world. OSHA describes fixed ladder safety in two primary sections of the Code of Federal Regulations (CFR). These two sections are 1910.23-Ladders [3] and 1920.28-Duty to have fall protection and falling object protection [4]. In order to simplify the subject of fixed ladder safety, the following is an abbreviated explanation of the current OSHA requirements that apply.

OSHA standards & how they apply to various ladders

The standard applies to all ladders except those used for emergency operations such as firefighting, rescue, and tactical law enforcement operations, or training for these operations or if the ladder is an integral part of machines or equipment.

Fixed ladder rungs must be parallel, level, and uniformly spaced between 10 and 14 inches apart except for elevator shafts where the spacing must be between 6 and 16.5 inches or telecommunication towers where the rungs must be no more than 18 inches apart. Fixed ladder rungs must have a minimum clear width of 16 inches measured before the installation of ladder safety systems. The minimum perpendicular distance from the centerline of the steps or rungs, or grab bars, or both, to the nearest permanent object in back of the ladder is 7 inches except for elevator pit ladders which can have a minimum perpendicular distance of 4.5 inches.

Grab bars do not protrude on the climbing side beyond the rungs of the ladder that they serve. The side rails of step through or sidestep ladders extend at least 42 inches above the top of the access level or landing platform served by the ladder. For step through ladders, the steps or rungs are omitted from the extensions, and the side rails are flared to provide between 24 and 30 inches of clearance except for ladders with a ladder safety system where the maximum clearance must not exceed 36 inches.

Fixed ladders that do not have cages or wells must have a clear width of at least 15 inches on each side of the ladder centerline to the nearest permanent object and a minimum perpendicular distance of 30 inches from the centerline of the steps or rungs to the nearest object on the climbing side. When unavoidable obstructions are encountered, the minimum clearance at the obstruction may be reduced to 24 inches, provided deflector plates are installed.

If a fixed ladder extends more than 24 feet above a lower level, then:

One type of Ladder Safety System is a cable assembly which is anchored to the rungs at the top of the ladder and includes intermediate brackets to hold the cable in place plus a cable bracket at the bottom of the system that applies tension to the cable so it stays in place along the length of the ladder. The system includes a cable “traveler” which the user attaches to the front sternal D-Ring on their harness. The cable traveler glides up and down the cable as the user moves and locks onto the cable in the event of a fall. Cable type ladder safety systems are often the most economical solution for ladders that are more than 50ft tall. They are also often used on other types of structures like monopoles and lattice towers.

The other type of Ladder Safety System is a rigid track assembly that is anchored to the rungs along the length of the system. The system includes a track “carriage” which the user attaches to the front sternal D-Ring on their harness. The carriage glides up and down the track as the user moves and locks onto the track in the event of a fall. Track type ladder safety systems generally apply lower forces to the ladder since the system is rigid, so the forces are distributed along the length of the system at each rung attachment, therefore they are sometimes a simpler solution for lower strength ladders. Track type systems are also a simpler solution sometimes in outdoor environments where high wind speeds are expected since they are not susceptible to vibration (aka cable flutter) which must be designed for with cable systems.

The typical Personal Fall Arrest System is a davit system that is attached to the rungs at the top of the ladder. The davit has a self-retracting lifeline (SRL) attached to it and the user connects to the system by attaching the SRL snap-hook to the back dorsal D-Ring on their harness. The SRL extends and retracts as the user moves and the SRL locks in the event of a fall. Davit type systems are sometimes seen as more user friendly since the attachment is made at the back D-Ring which all OSHA compliant harnesses have rather than having to attach at a front D-Ring which is typically a specially ordered harness. The davit also provides the user a natural grab bar for stability at the top of the ladder.

Flexible Lifeline Systems has decades of experience designing, installing, and training users on all of these systems and our Systems Specialist are happy to offer advice about which style is the best fit for your situation. Because an arrested fall is possible with all of these systems, a proper rescue plan should be a part of your safety program and our Systems Specialist are available to assist with advice about rescue option also.