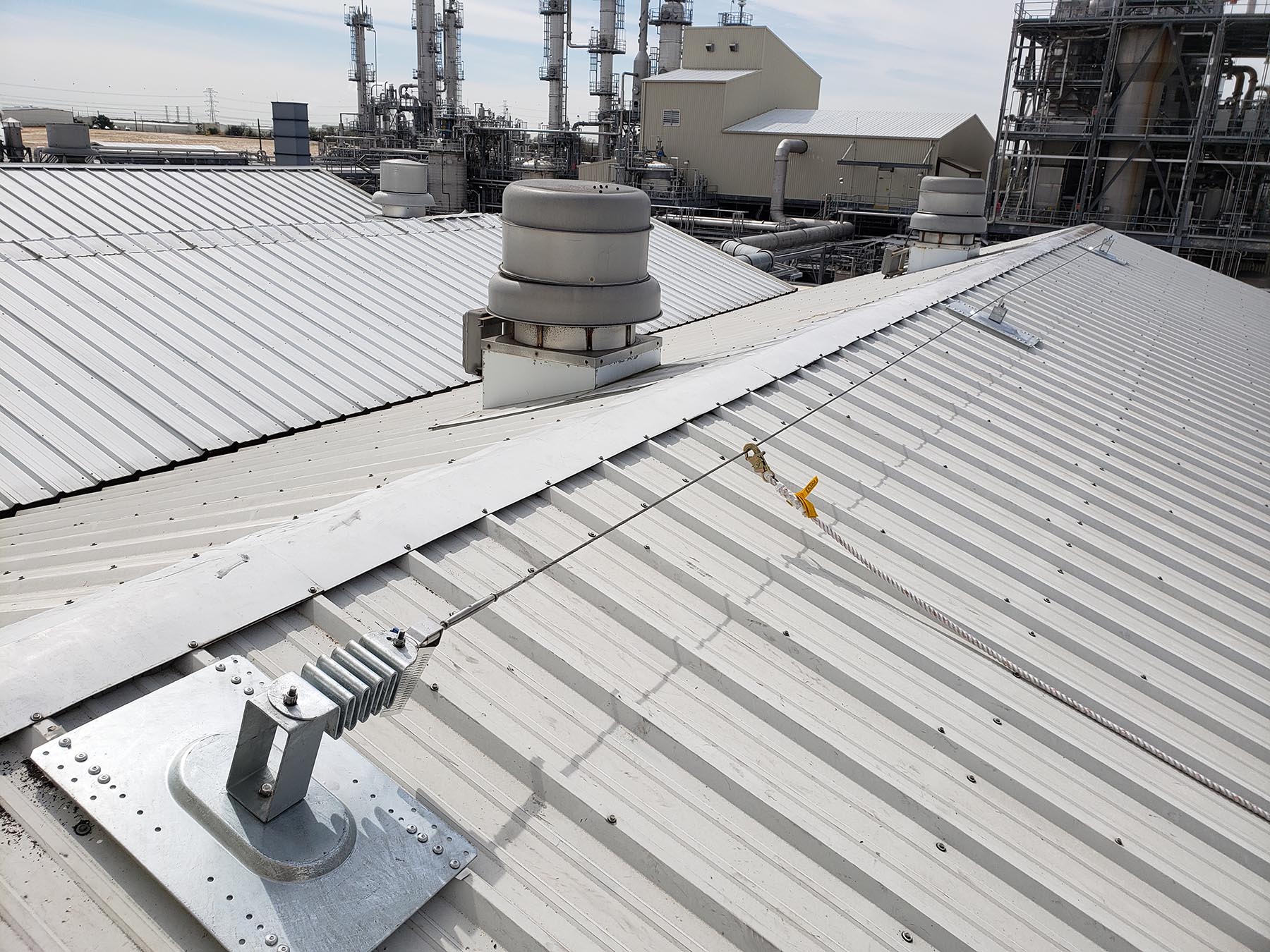 There is often a dilemma when working up a design for fall protection systems over the level of protection needed for the workers and whether a fall arrest system is needed or if a fall restraint system will suffice. The common definitions for fall restraint, fall arrest and positioning are listed below to help illustrate the differences. Each has some particular nuances that need to be understood to develop a safe and compliant system.

Fall Restraint: The technique of securing an authorized person to an anchorage using a lanyard short enough to prevent the person’s center of gravity from reaching the fall hazard.

Fall Arrest: The action or event of stopping a free fall or the instant where the downward free fall has been stopped.

Positioning: The act of supporting the body with a positioning system for the purpose of working with hands free.

The first area that we will discuss is that of fall restraint. One of the easiest parallels to this is a dog on a leash. A fixed length lanyard is sized in such a way to prevent the worker from ever coming in contact with the fall hazard while attached to the system. In the case of a horizontal lifeline located around the perimeter of a flat or low slope roof, a user with a 6’ non shock absorbing restraint lanyard would be held in restraint if the horizontal lifeline system is located 7’ or more from the roofs edge. High slope roofs are not good candidates for restraint systems as the slope of the roof already lends itself to a fall arrest event. (This scenario is over simplified for illustrative purposes. Some readers will be aware that the position of the attachment point on the workers harness at the dorsal D‐ring and the relative height of the horizontal lifeline also effect this calculation. The Pythagorean Theorem is often used to help determine the optimal position for locating these fixed lifelines.)

From an engineering and design perspective, the potential loads associated with fall restraint systems are relatively low. This is often a good solution for roof structures that do not have enough strength for full fall arrest systems without significant reinforcement.

The training of the workers for this type of system is also minimal based on the fact that they have few variables to work with. There is also no chance of a fall event with this type of system and thus the element of suspended rescue should not come into play.

There is the important aspect of safe access for the workers as they move to the system to attach. A true restraint system will allow safe and protected access to the system prior to attachment and will also allow safe egress once the work has been performed. This might be through a penthouse, elevator, stairwell or roof hatch.

The second area to discuss is that of fall arrest. This system is designed for areas in which the technicians must get up to and sometime over a leading edge hazard. In this case a worker is exposed to a fall. These systems are designed for the dynamic loads incurred during a fall even. In this scenario, the workers are usually attached to the system with a 6’ shock absorbing lanyard that will keep their loads under a predetermined amount. Based on a 6’ freefall with a 6’ shock absorbing lanyard, a worker up to 310 lbs will generate a maximum of 900 lbs force with an ANSI compliant lanyard and up to 1800 lbs force with an OSHA compliant lanyard. These forces act in such a way on the horizontal lifeline in which the workers are secured, that multiplies the force  and potentially generates a much higher force on end anchors of this type of system. These forces must be resolved to protect the workers and eliminate damage to the building.

From an engineering and design perspective, the loads associated with a cable based fall arrest system are significant and effected greatly by a number of factors. The number of workers, their mass, the type of fall arrest subsystem they are using, their freefall potential and their location on the system. The design of the system itself also greatly affects the loads. Variables such as, total span, number of intermediate attachments, cable type, modulus of elasticity of the cable, pre-tension, corners and any shock absorbing elements have a direct relationship with the load transmitted to the structure. The training of the workers for this type of system is more involved based on the fact that the equipment in more complex. For example a fall arrest system for window washers might utilize an anchor, a suspended rope system, a rope grab, a short shock absorbing lanyard and then finally the harness. Systems such as this that require assembly and constant  adjustment have a higher level of training required.

In fall arrest situations, we also introduce the element of rescue from heights. A rescue plan that only involves calling 911 is not enough. A comprehensive system of rescue is often required to provide timely rescue of a fallen worker.

The last area to discuss is that of work positioning. We lump this together with restraint and fall arrest for comparative purposes, but it is often only utilized in a fall arrest  situation. In the event that a worker is climbing or working at heights we generally use a primary and secondary means of attachment to the structure. Take for example a worker climbing a ladder  up a 100’ cell phone tower. He is required by OSHA to utilize a safe means of work and in this case the ladder is equipped with a vertical cable lifeline system. He works with a full body harness  with front d‐ring in which to attach a cable grab device that locks up in the event of a fall.

This worker when ladder climbing uses his feet and hands as his primary means of attachment to the ladder. When climbing he keeps three points of contact with the ladder at all times to stay in  control and use proper technique. In the event of a fall his secondary attachment method kicks in, which is the vertical lifeline system.

If this worker gets up to the top of the cell tower and has to do some work with both hands, he will loose is primary means of attachment. The key here is to employ the use of a work positioning  device. This may be as simple as a fixed length or sometimes adjustable length lanyard that is attached to a side D‐ring of the climbers harness, passes around the structure and then clips back in  to the D‐ring on the other side of the climbers harness. He can then use this along with his legs as three points of attachment, thus leaving both hands free for work. The backup or secondary attachment means is still the ladder climbing device.

This same method can be used in other areas with a positioning device to hold the worker in place and an additional shock absorbing lanyard can be used as the backup. Primary and  secondary… always required. This idea of work positioning takes the place of your hands or feet when they are occupied with another task.

There is a high level of training and forethought to those who use work positioning. Whether a cell tower technician or a wind farm maintenance crew, pre-planning is necessary to make sure you have safe and compliant gear and the requisite training to use it.

From an engineering perspective, work positioning systems never see the full impact of 6’ freefall. There is a chance though that they could see some freefall and are generally designed to handle the loads of up to a 2’ freefall without shock absorbers employed.

Most work positioning systems are use in a fall arrest environment, so the preparation for a fall event and rescue is a must.