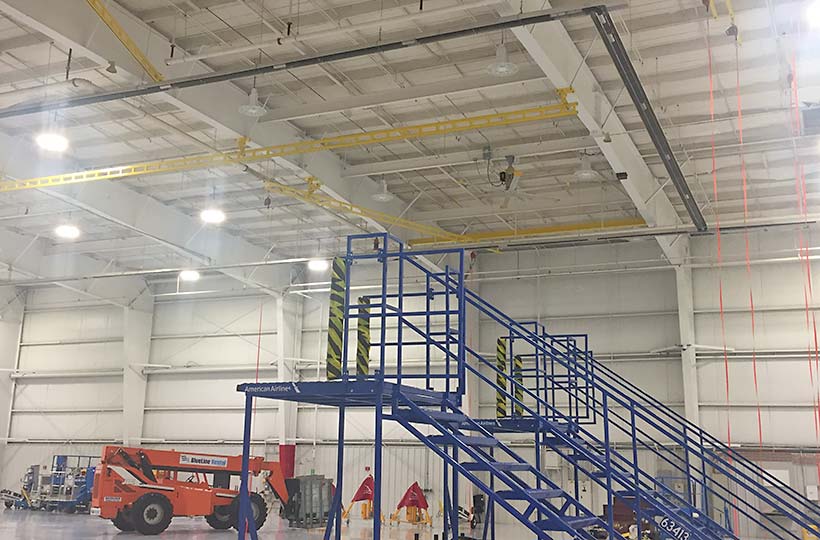 American Airlines, Inc. (AA) is a major U.S. airline headquartered in Fort Worth, Texas. It is the world’s largest airline when measured by fleet size, revenue, scheduled passengers carried, scheduled passenger-kilometers flown, and number of destinations served. American together with its regional partners operates an extensive international and domestic network with an average of nearly 6,700 flights per day to nearly 350 destinations in more than 50 countries.

Aircraft Maintenance personnel routinely perform inspections and repairs in all areas inside and outside of the Embraer 175 Aircraft. American Airlines recently upgraded the Hangar at Clinton International Airport, Little Rock, to accommodate the Embraer 175. The interior mechanical, electrical, and plumbing (MEP) systems, heater, and fire suppression systems were relocated due to the increased vertical clearance required with the Embraer 175, but were limited by the structure of the existing hangar.

The largest challenge facing FLS was designing compliant and user-friendly fall protection while maintaining the client’s aircraft clearance requirements. AA standard is 10’ clearance envelope around the entire aircraft. The Top of the Embraer 175 vertical stabilizer is 32’-4”. The bottom flange of the primary roof support beam girder varied from 32’-5” to 36’-3”, and radiant heaters and other MEP items were suspended below the girders.

A non-typical approach was required to design and install the systems above the heaters, below pipes, and positioned such that the work areas on top of the aircraft could be protected without excessive swing fall.